Lieutenant Michael Wyatt, San Jose Police Department.  Currently working Homicide, which is very useful since the lady he’s got his eye on—that would be Emma, of course—keeps tripping over dead bodies.  He’s a dedicated cop, kind to animals and children, honest and hardworking. Sounds like a Boy Scout, huh? Well, no. 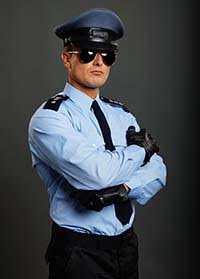 He and Emma got off to a rocky start. When Emma first saw him, they were at a crime scene and she was the suspect:

“Emma’s heart did a triple axel and her breath caught for an instant—[he] wore plain clothes and was clearly in charge. He wasn’t especially handsome. He looked like a tired, irritable man who wanted to go home.

He looked like what she’d been waiting for all her life.

The second time they met, she learned he was a handy man to have around when the going got tough. She had just found her sister’s body:

“Before she realized she could move, she had fled blindly into the hall and smashed into someone standing at the door.

His hands clamped on her upper arms and he held her away from him. “In a hurry, Ms. Goldsmith?”

[Wyatt] set her aside with a muttered, “Stay here,” and charged into Jane’s apartment. She slumped against the wall and listened to his footsteps, his shout of “Police,” and shivered with fear. Had she seen a gun in his hand before he went through the door? She thought so.”

So he’s hot, powerful, protective, and—it turns out later—very, very nice. She just might want to keep him around.